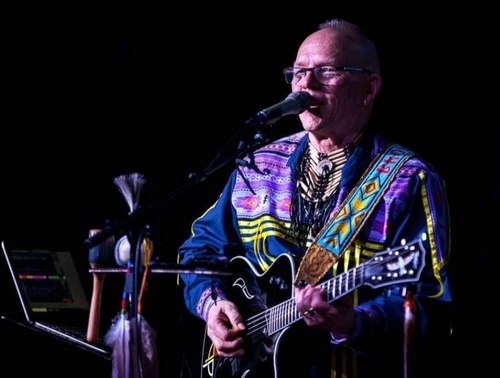 Event Description:
Mountain Entertainment Group for the Arts is sponsoring a free concert by Jonathan Maracle, a Mohawk/Scot from Ontario, Canada who resides on Tendinaga Mohawk Territory with his wife and four children. This concert is part of a renewed effort by MEGA to bring culturally unique and relevant creative arts events not readily available in our area.
As the visionary and founder of Broken Walls (an internationally recognized Indigenous musical group) Jonathan has travelled the world for the past 26 years.
The vision of Broken Walls is to see people from cultural minorities restored and able to walk in their true destiny, realizing and able to share their unique gifts and abilities with the world around them.
Broken Walls targets major issues such as social struggles and suicide prevention through music and presentations.
Jonathan’s solo concert will feature many of the songs that Broken Walls performs, along with some of his recently written pieces from their new CD, “The Call of the Drum”.
Along with playing and singing, Jonathan engages his audience with contextually spiritual conversation and explains why the drum, dance and cultural expression are so important.
You won’t want to miss this wonderful evening with one of the world’s most accomplished Indigenous flute player, traditional drummer and singer.
The concert is being fully funded by Mountain Entertainment Group for the Arts/MEGA nonprofit, along with private donations. It is MEGA’S mission to bring more of these unique professional performances to our area.
The concert is free, but donations toward MEGA will be appreciated and are tax-deductible.
Location:
Sacred Grounds Coffee and Tea House
2704 Sudderth Drive
Ruidoso, NM
Date/Time Information:
Friday, February 17, 2023
7 pm
Fees/Admission:
The concert is free, but donations to the Mountain Entertainment Group for the Arts will be appreciated and are tax deductible.
Set a Reminder:
Business Directory Events Calendar Hot Deals Job Postings Contact Us Weather