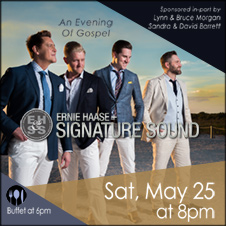 Lead by the acclaimed tenor Ernie Haase, Signature Sound has touched audiences around the world for both their praiseworthy approach to music and powerful content. Fan loyalty has translated into gold and platinum CDs, DVDs, and numerous awards and nominations. Starting out in the Cathedral Quartet with gospel royalty Glen Payne, Ernie Haase later helped to form the Old Friends Quartet before taking control of his own destiny in 2003, ushering southern gospel into the 21st century.